Some readers may have already seen the LED Scroller, which I built years ago as a special birthday present. From time to time I received requests for a larger version of this project with easily customizable scrolling text.

Together with my father Uli (DL5OAU) we developed a kit, which is described in the Praxisheft 25 of the Arbeitskreis Amateurfunk und Telekommunikation in der Schule e.V. (AATiS) and can be purchased there under the number AS115. 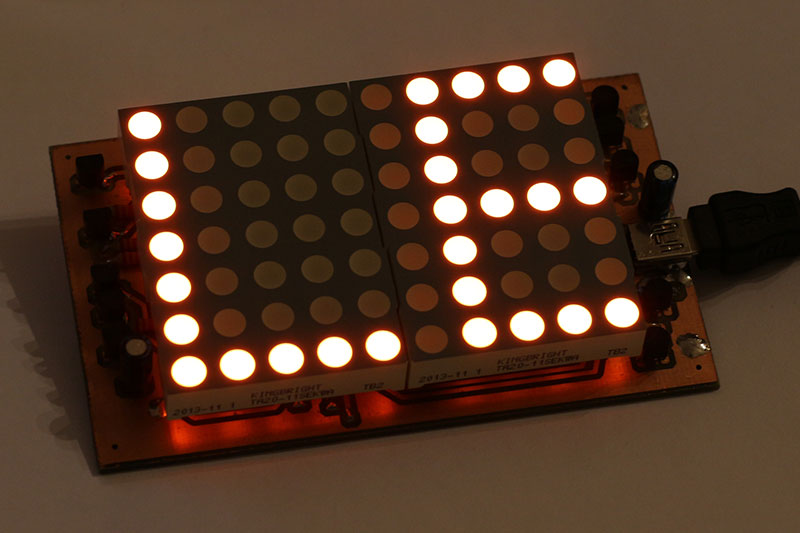 An ATMega88 is used as the controller. To simplify the assembly, only wired components are used. The PCB is 100mm x 60mm in size, plated through, coated with solder mask and equipped with silkskreen. The module has a 53mm x 76mm matrix of 10 x 7 orange bright LEDs.

The messages specified by the user can be edited via a Windows software and transferred to the controller. Since the texts are stored in the EEPROM, they are retained even in the event of a power loss. The controller can store up to four messages with a maximum of 120 characters each. In the Windows program you can also set the speed.

The module has a mini-USB socket, through which it is supplied with power and also can be programmed. After the module has been programmed, it can also be powered via a USB cell phone charger. Programming software and firmware of the controller are open source software under GPL v3.

For communication with the PC, the software USB Stack V-USB by Objective Development is used. All parameters stored in the EEPROM can be read and written via USB Control Messages. In addition, commands were implemented to deactivate the scrolling text and to write directly into the pixel buffer. If you have programming skills, you can use the ticker as an additional display on your PC.

The bootloader USBASP Loader is preinstalled on the microcontroller. After setting the jumper the device identifies itself on the computer as USBASP programmer, an updated or modified firmware can be flashed directly without additional hardware and soldering.

The LibUSB is used as device driver. On Windows up to and including Windows 7, the driver listed below can be used. Windows 8 / 8.1 and 10 require a special signature, the installation is done here using the tool Zadig from Akeo Consulting.

A more detailed description and assembly instructions can be found in the AATiS Praxisheft 25!

A minor typo in the Praxisheft

The resistors R1 to R7 are marked with 68 ohms in the Praxisheft on figure 2 and 4. These have been increased to 100 ohms and are included in the kit accordingly. All kits contain printed circuit boards with correct silkskreen. An updated schematic is downloadable below.

The ticker is recognized as "LED Message" when connected to the PC. If messages like "Unknown device" appear, something is going wrong with the communication. In this case the correct assembly of the two 100 Ohm resistors R18 and R19 as well as the 1.5K resistor R20 should be checked. Also the Zener diodes R3 and R4 should be polarized correctly. The connection to the socket is checked for cold solder joints or short circuits to 5V, ground or to the data lines with each other.