This alarm clock was developed in 2007 as a birthday present for a good friend. A round VFD tube of the type IW-18 (IV-18) from Russian Surplus stocks is used. With its transparent acrylic case, the unit is a real eye-catcher. The firmware has been updated with a lot of new functions over the years. 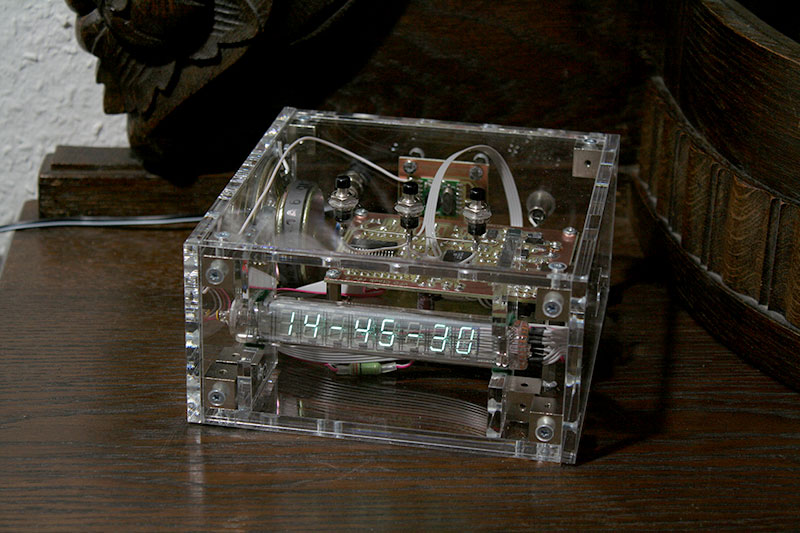 Compared to the first talking alarm clock, special driver components were used. The AC voltage for the heater as well as the anode voltage is generated by a LM9022. This chip is basically an operational amplifier with a powerful output stage. The square wave voltage at the output directly controls the heater, and generates about 20V DC with the subsequent Villard multiplier circuit. A MAX6921 controls the segments and grids of the display tube. It integrates high voltage drivers and a shift register.

The heart of the circuit is an ATMega32 microcontroller. This is clocked with 8MHz. The serial interface is connected to a FT232 USB-Serial-Converter. On the I2C bus there are a DS1338 real-time clock and a DS75 temperature sensor.

The speech output uses an ISD2590 speech memory whose address pins are connected to the microcontroller via CD4094 shift registers. Some outputs of the shift registers control a DS1866 digital potentiometer for volume adjustment and a transistor that activates the LM386 NF amplifier. An LDR provides display brightness adapted to the environment, two ultra-bright green LEDs provide impressive illumination in case of alarm.

Afterwards, two circuit boards were created from the designs. The main board is double-sided. On this board there are display control circuitry and microprocessor as well as peripherals. A small challenge was the RTC. In this case, not only the components themselves play a role, but also the layout and possible flux residues in the area of the clock crystal. During the experiments, the originally planned chip DS1307 was replaced by a DS1338. Some layout revisions later I achieved the planned accuracy. 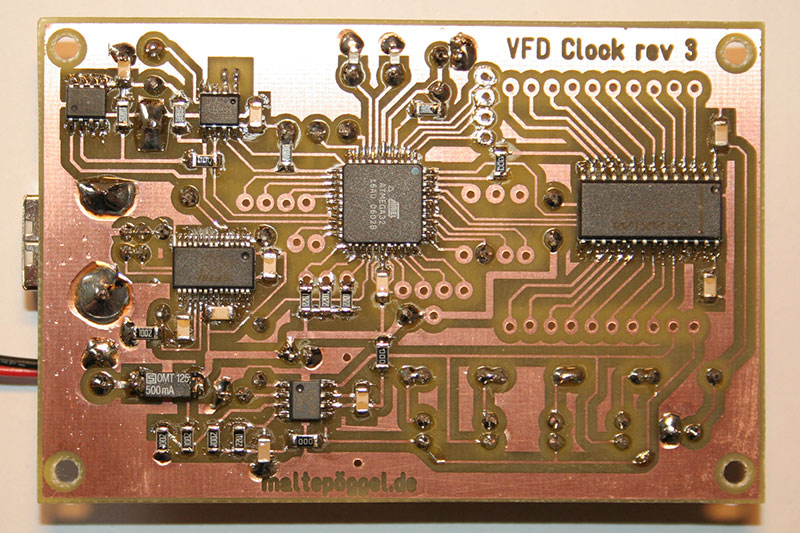 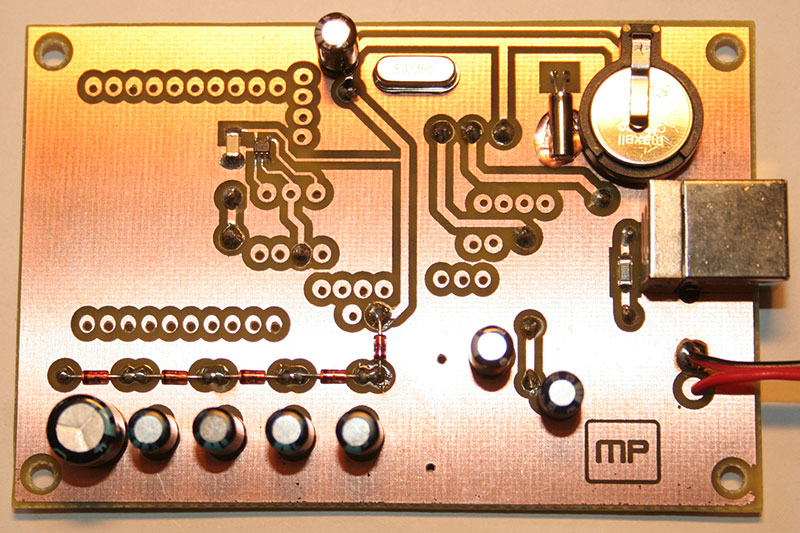 The speech output board was first tested on the breadboard, and was implemented on a single-sided board. 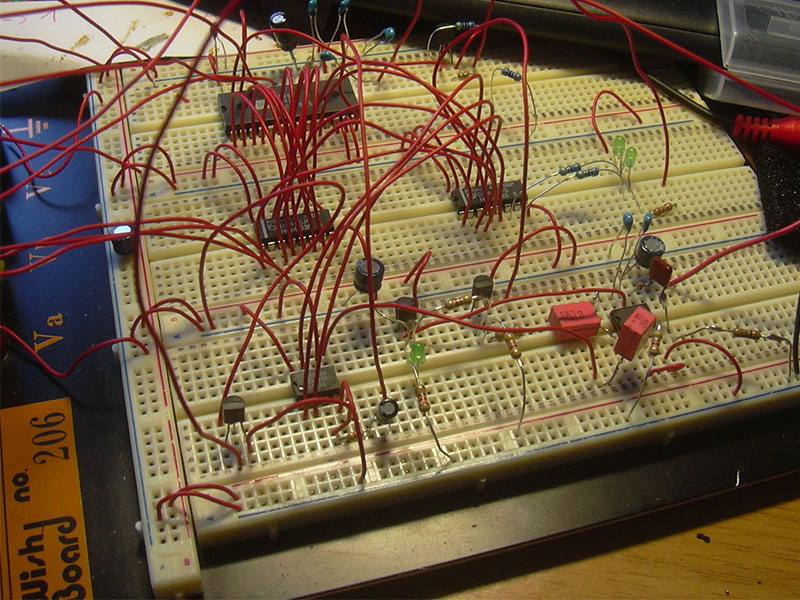 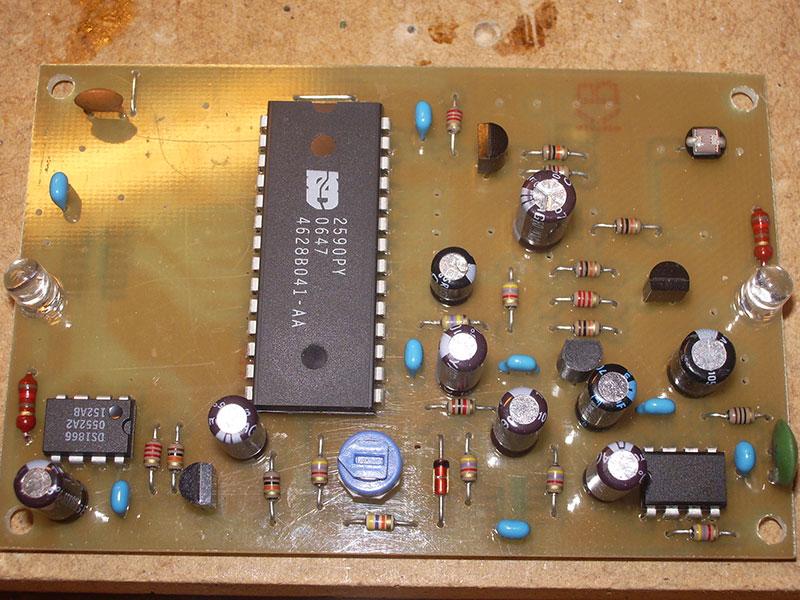 The housing is made of acrylic glass and is screwed together with threaded cubes in all corners. The prototype was sawed out by hand, later boxes are laser cut. Thus the edges are completely transparent, which looks very noble. 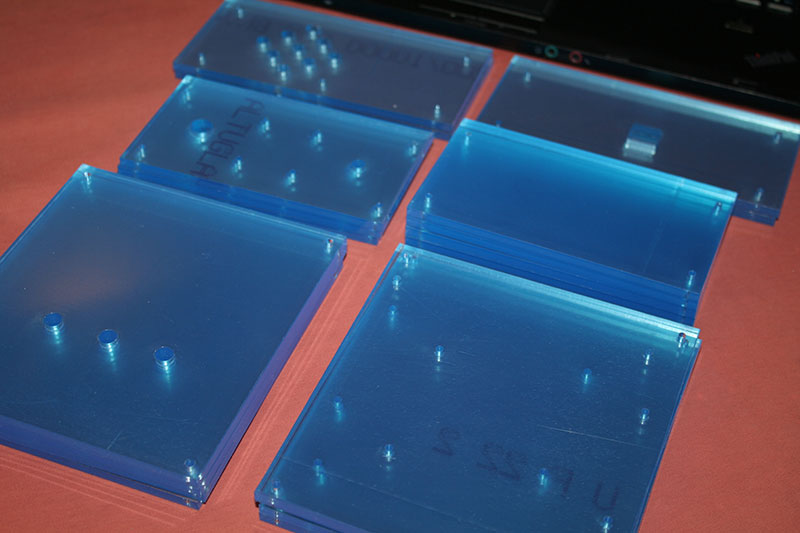 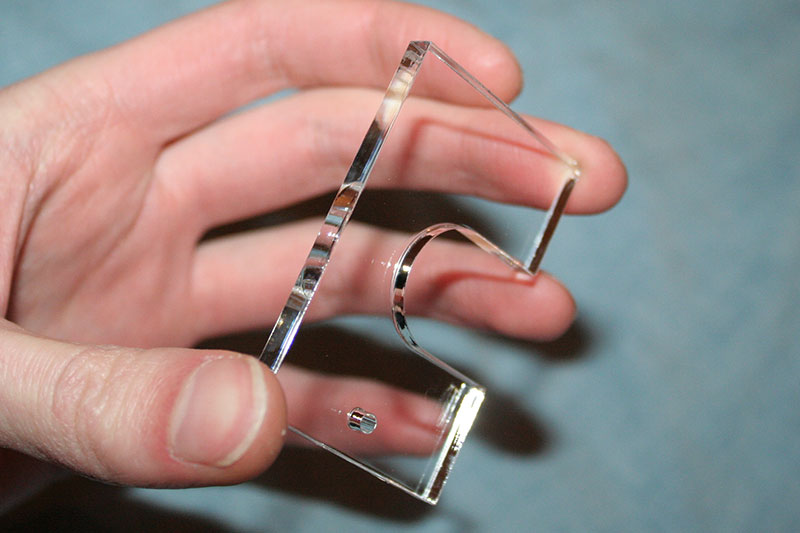 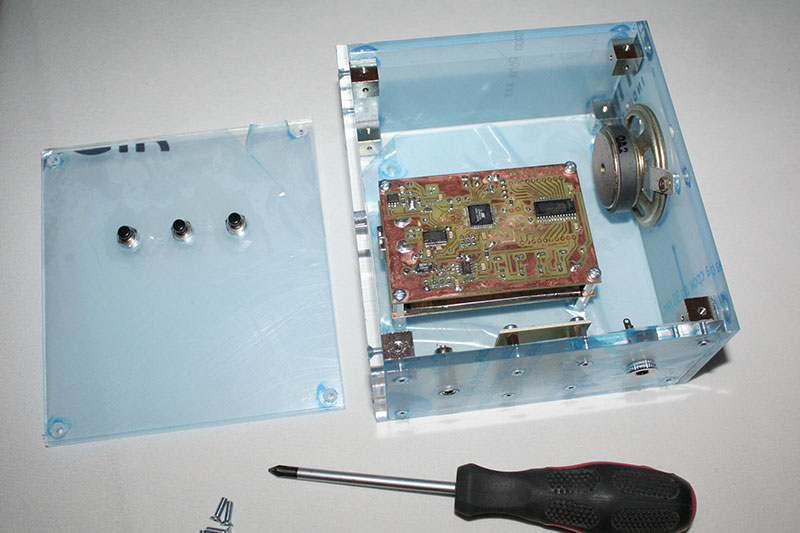 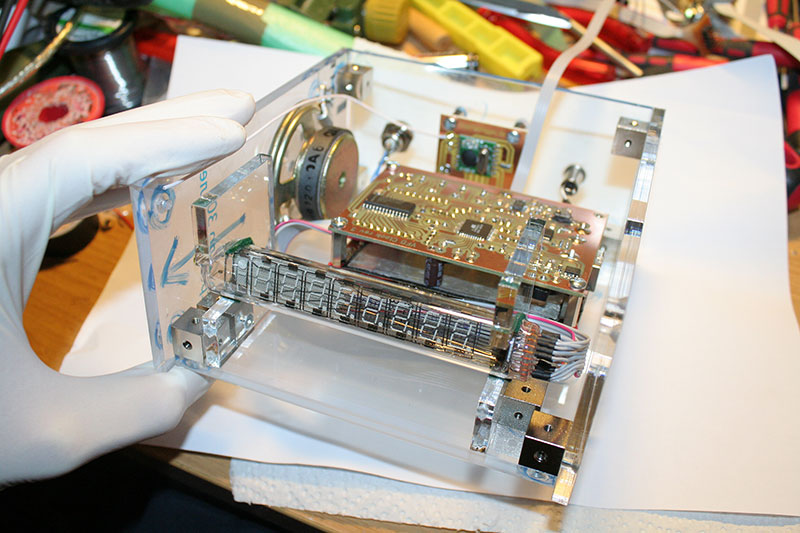 The finished setup is very impressive: 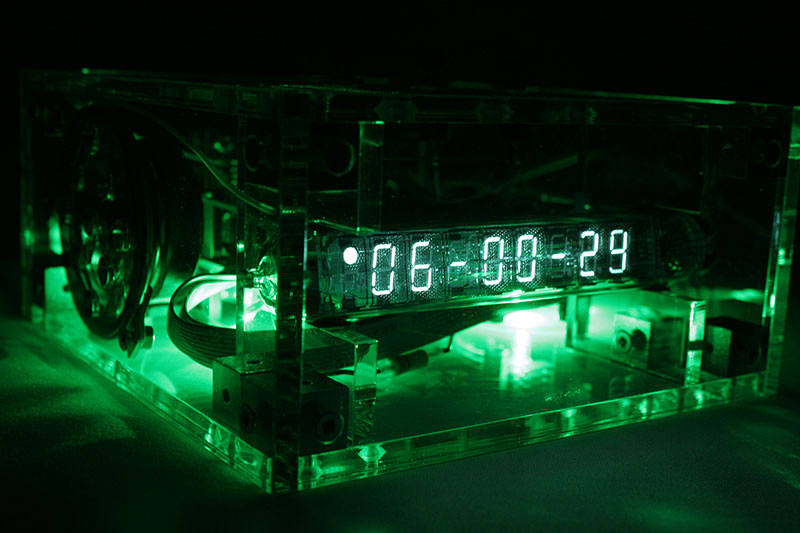 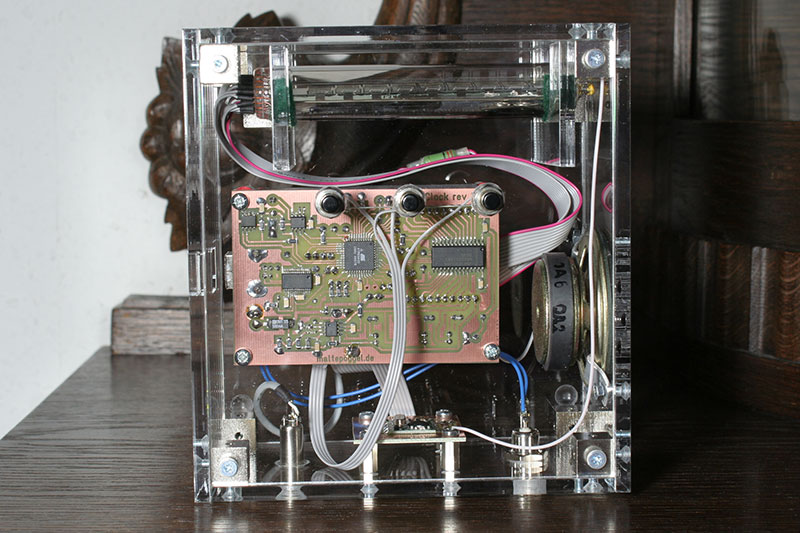 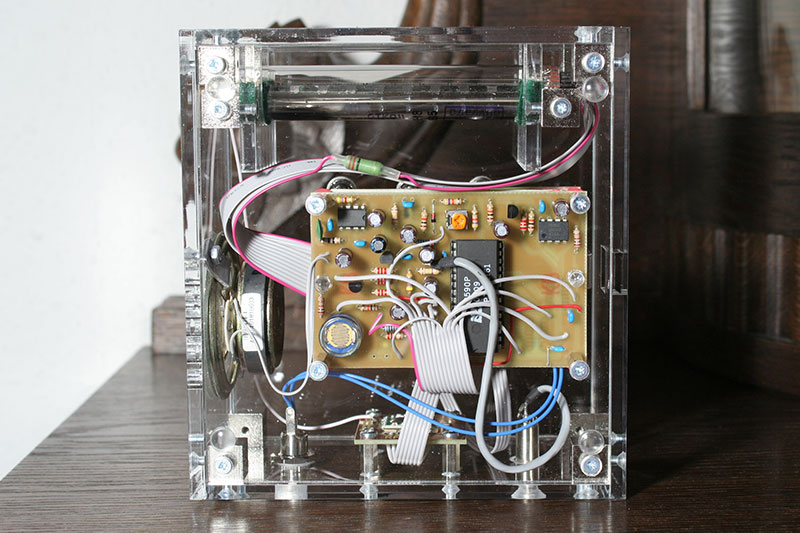 The firmware was initially written in Bascom, but was rewritten using C in 2008. In the following years, there were frequent function updates and improvements, such as a fully parameterizable snooze function, moon phase display, a radio module or a daylight saving time automatic. The firmware is published under the GPL v3 open source license.

The features of version 2.2 include:

In June 2008, an outdoor sensor was planned as well. This sensor uses RFM12 radio modules for communication on 433MHz. It was supposed to transmit outdoor temperature and DCF77 time, and be battery buffered with a solar cell. However, the firmware for it was never fully implemented. The radio module in the clock can, though, be used to automatically switch on commercially available radio-controlled sockets at alarm time, and switch them off again after a user-defined interval. This can be useful for switching a lamp, for example. 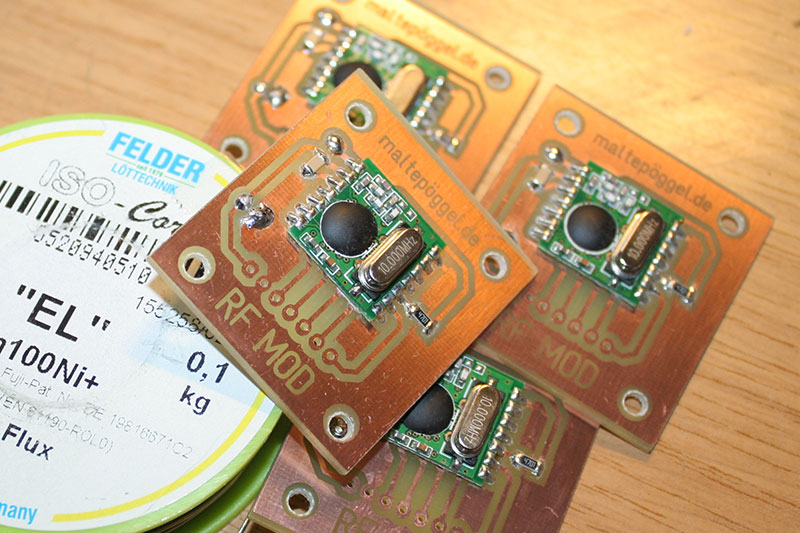 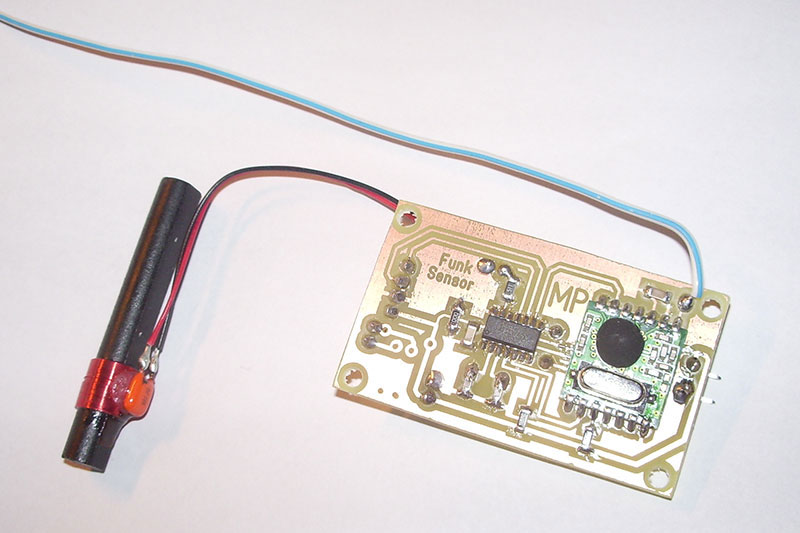 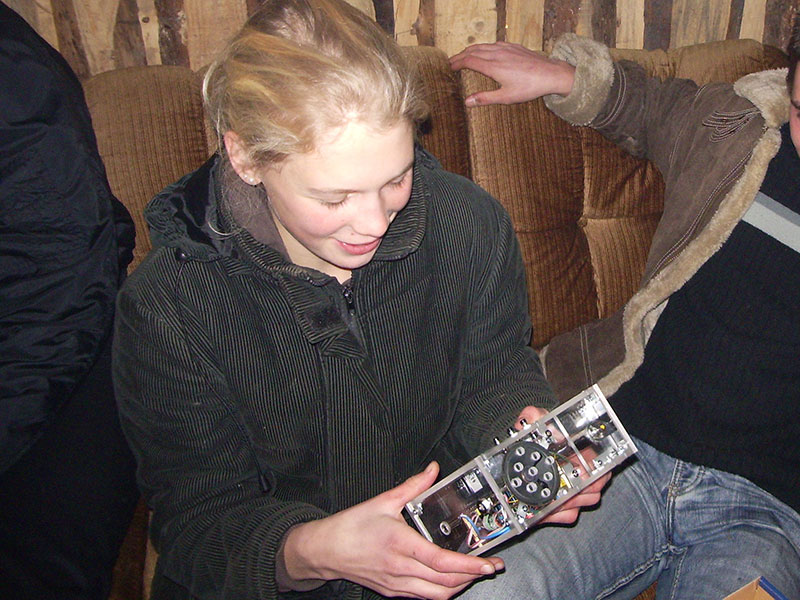 The gift provided a lot of joy and is still in use after more than 15 years of continuous operation. The alarm clock reliably rings at the set alarm time and the automatic daylight saving time changeover also works without any problems.

Some minor repairs like capacitors in the power supply or the memory battery of the RTC were of course necessary.

Unfortunately, some components like the ISD2590 voice memory or LM9022 filament driver have been discontinued by the manufacturer and are no longer available. So the few clocks I made remain unique.