Module for connecting wireless doorbells to an existing system

The goal of this project was to connect radio controlled doorbells to an existing mains powered doorbell system. Solutions available for sale usually use an expensive lithium battery in the transmitter for power supply and also require potential-free contacts (i.e. not compatible with a system with transformer).

The solution described in the article below can be operated with a DC or AC voltage between 8 and 12V and offers a potential-free input, which can be connected directly to the existing bell. 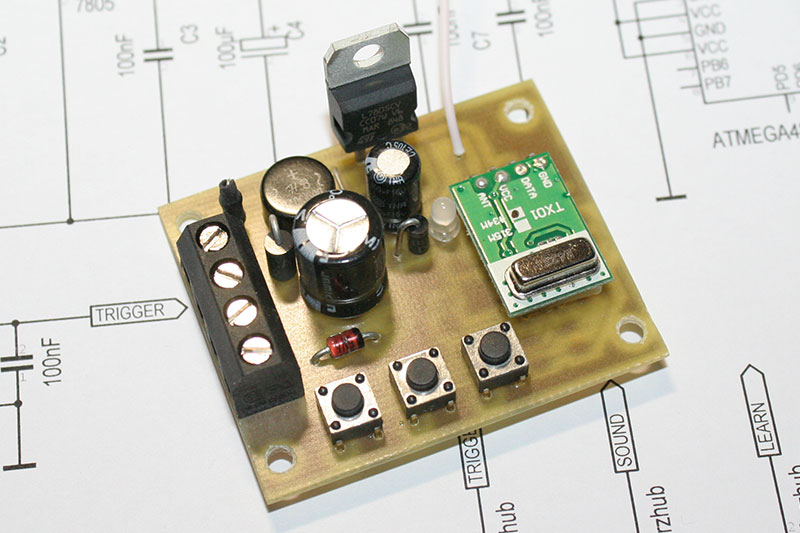 The transmitter routines for this are taken from the USBFunk project. They work well with all radio controlled doorbells of the manufacturer Heidemann that use the HX protocol. The bell command sent on 433,92MHz also contains an encryption code - a 8 bit random number which the gongs learn within the first 15 minutes in order not to be affected by other systems in the neighborhood. With the first button "Learn" this code can be changed if necessary. It is stored in the microcontroller of the transmitter module even in case of power failure. Thus, the gongs do not have to be reprogrammed if the mains power has been lost. There are also 8 different ring tones. These are determined by the transmitter as well. This setting is also stored in the processor internal EEProm, and can be changed with the "Sound" button. The last button "Test" has the same function as an applying voltage to the input - the radio controlled bells will ring.

Starting from version 1.1 the self-learning Intertechno radio gong with blue light ITR-7000 is supported alternatively. To switch, the "Learn" button must be held down for one second. After releasing, the LED flashes once (HX mode) or twice (Intertechno mode). A short press of the "Learn" button switches between 16 different codes A1/2/3/4, B1/2/3/4, C1/2/3/4 and D1/2/3/4. The "Sound" button has no function in Intertechno mode, because this bell only supports one ringing tone.

As of version 1.2, the module also no longer necessarily requires a permanent power supply. This means that no additional wires from the transformer are needed to supply the module. The input is bridged with the supply voltage, the module recognizes this and starts to transmit directly without delay. It can then simply be connected directly to the bell. However, this has the disadvantage that only as long as the bell button is pressed can be sent, which could possibly lead to the occasional failure of the gong to ring when pressed for a short time. Hints for the connection can be found in the manual and in the second video. Of course this firmware can also be used with permanent power supply. 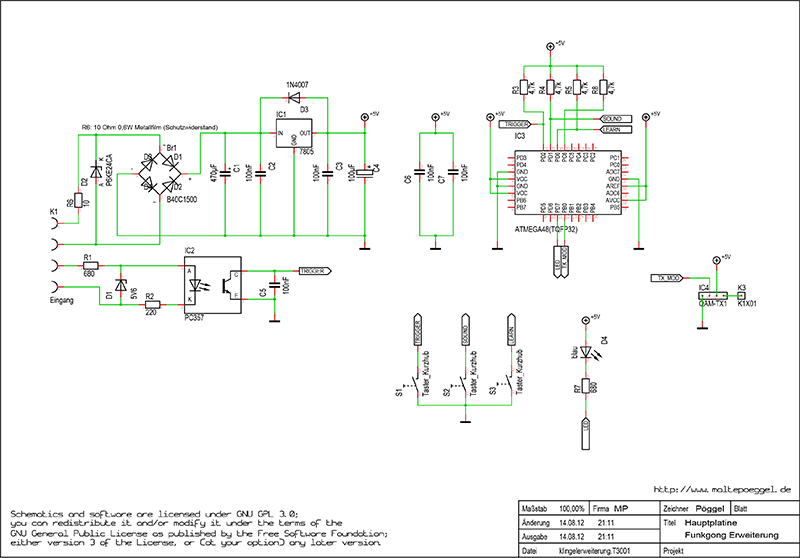 The circuit is relatively simple. All inputs are protected with TVS or Zener diodes against voltage peaks, as they occur when switching inductive loads - i.e. the coil of the existing doorbell. The switch input is also isolated by an optocoupler. As microcontroller I have chosen an ATMega48. It runs with 8MHz internal clock. A crystal is unnecessary because the small tolerances in the timings of the protocol do not disturb the receivers. As transmitter again the QAM-TX1 module from Quasar was used with a 17.3cm (Lambda/4) long wire as antenna. The blue LED also indicates that the module is ready for operation. 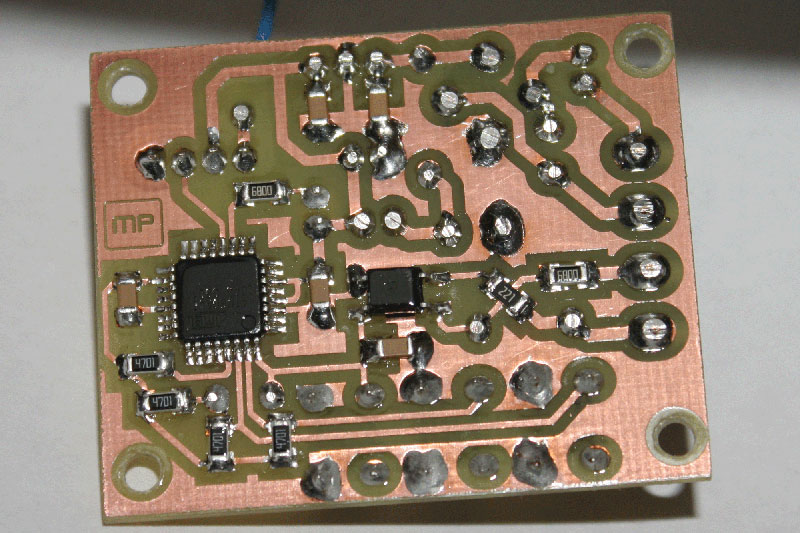 On the bottom side of the board, microcontroller, optocoupler and some SMD resistors and capacitors of 1206 type are clearly visible.

The module is small enough to fit in the existing gong: 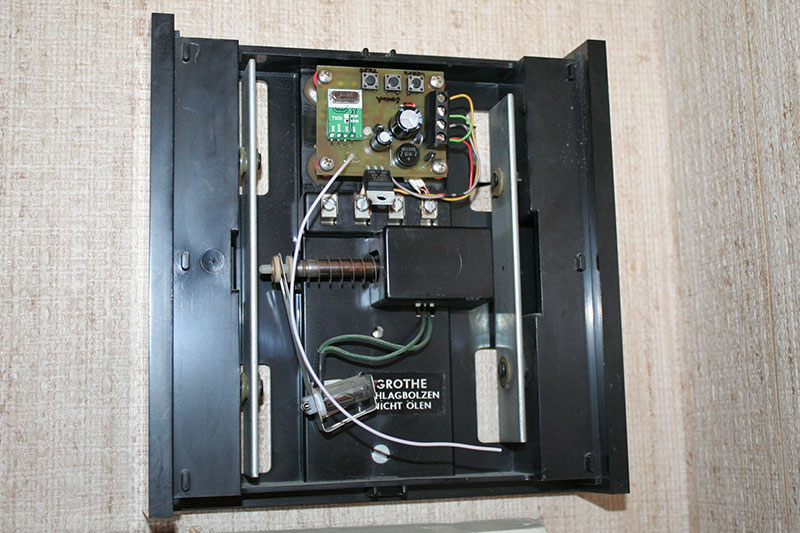 For mounting, I sanded the plastic housing and glued in threaded bolts with Pattex Stabilit. The easiest way to do this is to screw the bolts to the module beforehand (don't forget the isolation washers!) and then just put four blobs of two-component glue into the housing. The screwed threaded bolts are then simply placed inside. Further attachment is not necessary - the glue is already very well cured after 15 to 20 minutes. Thus the transmitter can be hidden invisibly inside the doorbell!

Since August 2011, this circuit now works without any problems with two wireless bells in my grandpa's house. The range in the apartment and garden can be up to 100 meters and hence no wishes remain open. The front door bell can no longer be overheard - and that without having to install an additional bell knob!